This turd had my 4 year old son and I taken out of a restaurant by FBI agent Greg Rampton.  WHY? He thought it would be cute. He also signed off on having me fingerprinted.  DPS Ass Ron Boyter served me with a Grand Jury subpoena in my front yard. Cute. See, Walt, had been “shot at”, right, so it was easy peasy to get a subpoena for MY fingerprints since I have HATED this fkr since 1972. HE was my divorce attorney, btw, had his office in the Old Westview Bank building, partnered up with Chuck Wallace.

WALT was the degenerate offspring of an illustrious sire and good looking. He also liked labeling himself as the “Hanging Judge” which was quite popular.

FOR BILL DUNNAM, when Walter was Judge of 54th., after a jury found _______can’trememberthefirst name DICKERSON, Walt, who had worked for Bill, JNOV’ed the jury verdict. This was a murder case, and the defense was insanity. The jury didn’t buy it but Walt did after the jury verdict……..sure did. He then became a Federal Judge because he was a puppet.

Before he was appointed, I wrote to the committee looking at his appointment and told them about him but naturally, they did nothing. EXCEPT tell him I had written. This plus him protecting his “buddy”, gave him a FOR LIFE opportunity to fk people and suck the system for money.

HE was the only witness Channel 8 called in our trial with Channel 8 in Dallas, Walt lied, got himself caught lying, embarrassed himself, and was probably worth a fortune in the punitive damages. THE JURY HATED HIM. 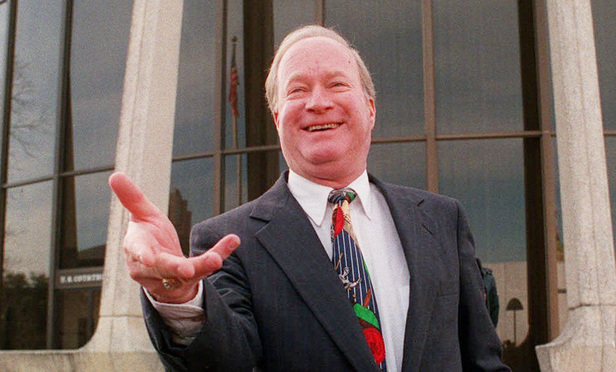 Now he is 79, and hopefully, he won’t do another “recapture the past” and find another woman he’s known forever to move right on in and be Mrs. Groping Judge.

Nice way to end up, I’m a bitch but you’re going out with a Groping Legacy.

This man did a lot of harm as Judge and in his personal life of Narcissism. Be careful who you elect, you might be stuck with the ass for life, unlike his 4 wives.

I love old age and being healthy. Drinking is a killer diller and Walt’s gin nose can’t be missed……….

Harry’s quote for the day:

OUTLIVING THEM IS THE BEST REVENGE

One thought on “WALTER SMITH LET’S SHARE A MEMORY”