FINALLY! A fact I knew for sure in the 80’s is now pretty much wide open and soon to burst forward in a bookstore near you. CULT OF GLORY is a new, well researched book about the TRUTH about our wonderful Texas Rangers. The advance copies have caused such a stir that the statue of the Ranger that has been in Love Field forever, is coming down. The book it seems paints the Rangers as to be so terrible that even before the book is out, the Statue is.

If you haven’t binge watched Netflix’s “THE CONFESSION KILLER” give it a go, have a look at the TEXAS RANGERS. Have a look at me who really screwed up some cases back in the 80’s and are such ass^%les that twenty years later they can’t admit it. Obviously, those above them are STILL letting them say and do whatever they want and, frankly, Bob Prince is fat and embarrassing. They all are. Mean, snarky, and wrong. WRONG then and still wrong.

MEAN to the families whose loved ones they told were killed by Lucas, now thanks to DNA Lucas has been cleared and the real killers have been caught, somehow that’s just not enough for the BUTT HURT TEXAS RANGERS.

So mean and it shows. Anyway, in Dallas at least they figure the statue of the SKINNY Ranger needs to go since there is racial unrest and people’s faith in law enforcement is at an all time low. Nawwwwwwwwww.

The Rangers are a club, good ole boys, living off historical reputations they certainly don’t have in this Century. Here in Waco we will continue to adore them and put them on a pedestal and perhaps let them expand onto an Indian burial ground or who knows what over by the river cause they’re the Rangers. 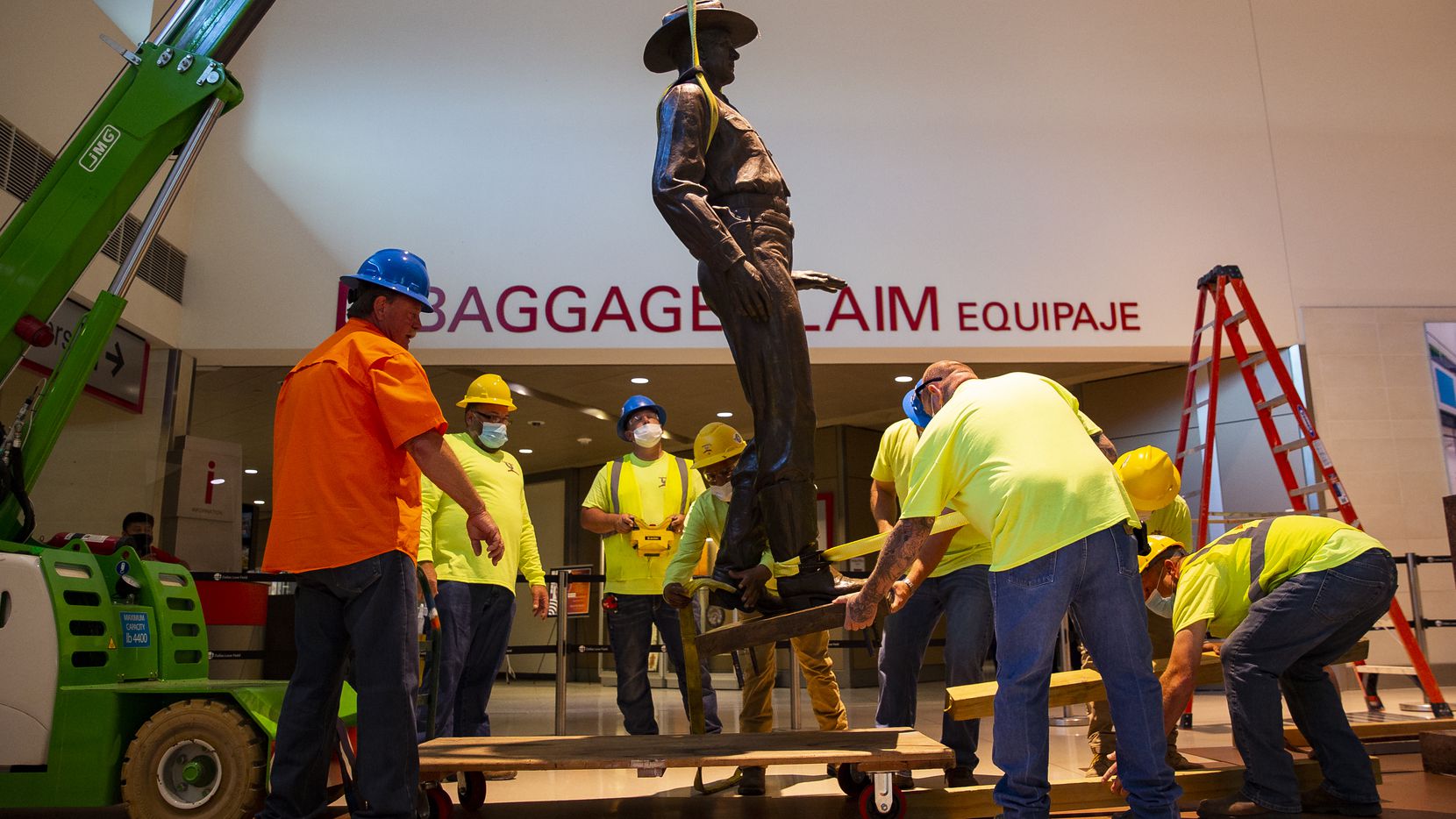 UPDATE: This story was updated at 5:30 p.m. with comments from the office of Dallas Mayor Eric Johnson and additional historical details on the statue.

The iconic statue of a Texas Ranger, a fixture at Dallas Love Field since 1963, was removed from the airport Thursday morning by a crew from the city of Dallas. The decision was prompted by an excerpt from a soon-to-be-published book about the law enforcement agency’s nearly 200-year history, which includes episodes of police brutality and racism.

Cult of Glory: The Bold and Brutal History of the Texas Rangers, written by Doug J. Swanson, will be released June 9. Its author spent most of his life in Texas, where he worked for The Dallas Morning News for 34 years before joining the faculty of the University of Pittsburgh, where he teaches writing.

Chris Perry, a spokesman for Love Field, said Wednesday that he and other airport officials had read an excerpt of the book that appeared recently in D magazine.

Apparently, the article raised concerns among city and Love Field officials because of its depictions of police brutality and racism by the Rangers during their history. 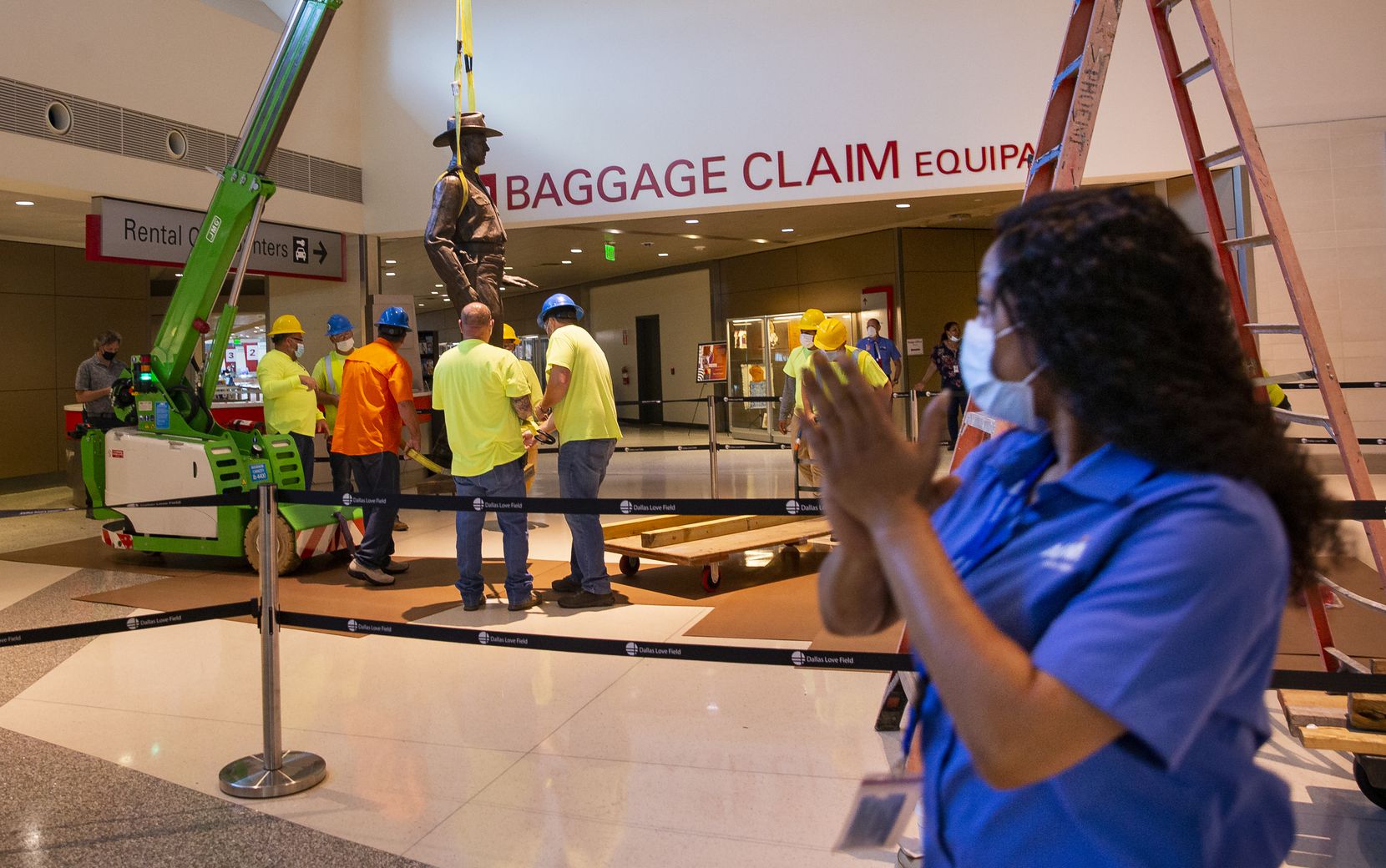 Swanson’s book arrives at a critical time in American history, when demonstrations have erupted across the country after the May 25 killing of George Floyd, who died in Minneapolis, Minn., after a police officer held his knee against Floyd’s neck, ignoring Floyd’s protests of not being able to breathe.

Perry said the fate of the statue, which will go into storage for now, would eventually be decided by the city’s Office of Arts and Culture, which oversees public art in Dallas. Perry said the arts commission and the mayor’s office might also weigh in before the city reaches a decision. The statue has disappeared at various times, during periodic airport renovations but has now been in the Love Field lobby since 2013.

The statue is so commonplace in Dallas folklore, however, that in 1966 then-Dallas Cowboys president Tex Schramm and Kansas City Chiefs owner Lamar Hunt met at the statue to launch negotiations that resulted in a merger of Hunt’s American Football League with Schramm’s National Football League. Fearing the statue was too public, the men opted instead for Schramm’s 1966 Oldsmobile, parked in the Love Field parking lot, where they resumed discussions that changed the sports world forever.

Like a football game whose outcome is still in doubt, the fate of the statue may still be up for discussion.