He wants YOU and I to think Dr. Fauci is mocking him, he is laying the groundwork to gut Dr. Fauci just like he does everyone else. This will be like murdering the family pet, but Orange Glo can’t see that. He has no sense of humor, can’t laugh at himself at all, in my world ANY MAN who combs his hair like that, well, my friends would laugh at me no matter how much $$ he had, spray paints himself orange, or, worse yet, stands there in his undies and has someone else do it,  (gag), spoiled, probably never changed a diaper, picked up dog pooh, owned a cat, took care of a plant, or anything a normal human would do. NOW he’s aimed his ego at Dr. Fauci.

Don’t you ever get tired of him talking down to you like you’re stupid????

President goes on retweeting tear, relaying messages in support of response – and shares footage of Fauci putting his hand to his head

Donald Trump went on a retweeting tear on Monday, relaying messages in support of his coronavirus response and controversial plan to “reopen” the US economy well before public health experts expect the outbreak to have subsided.

He managed, however, to apparently commit something of a “self-own”, retweeting footage of Dr Anthony Fauci at a White House briefing last week which most thought showed Fauci expressing clear concern at the president’s words.

The footage shows Fauci, the director of the National Institute of Allergy and Infectious Diseases, reacting to Trump’s reference to “the deep state department” during a briefing last Friday.

The deep state conspiracy theory holds that a permanent government of bureaucrats and intelligence officials exists to bring Trump down. The former White House counsellor Steve Bannon, one of the first propagators, has said it is for “nutcases”.

Dr Fauci was seen to look at Trump, smile ruefully and then rub his brow and jaw.

The tweet retweeted by the president on Tuesday, by “professional Mexican and taco enthusiast” Laura Martínez, said, “Dr Fauci is all of us” – in a clear reference to a feeling of being exasperated at Trump’s antics and misinformation: something Trump appears to have misunderstood.

Dr. Fauci is all of us 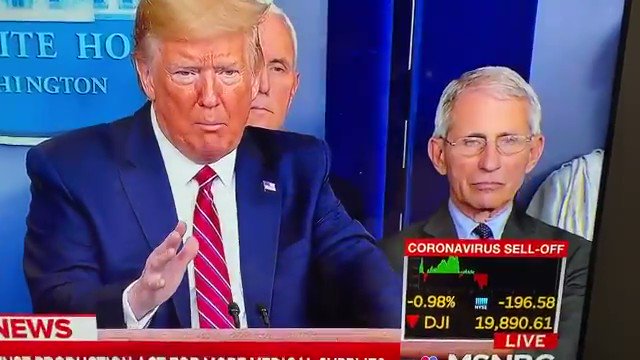 13.8K people are talking about this

Among responses to Trump’s retweet of the footage of Dr Fauci touching his face, the CNN contributor Elie Honig wrote sarcastically: “Good retweet. Because the point is how Dr Fauci is overwhelmed by and reacting to the words of sheer medical genius he is hearing from you, Mr President.

“To responders claiming Fauci is laughing [because] Trump is so on point here, sure, that’s how people usually laugh, by grimacing like they just bit a lemon, covering their face, and then wiping sweat from the brow. If he’s such a cheerleader, where’s he been lately?”

Dr Fauci was absent from Monday night’s two-hour White House briefing, giving rise to concern on social media over whether his measured criticism of the president in interviews had led to his being sidelined or even fired.

On Tuesday morning, Trump also tweeted footage of Dr Fauci speaking to the Fox News host and pro-Trump author Mark Levin, in which Fauci said the president “asks a lot of questions”.

“That’s his nature. He’s constantly asking questions. And I never, in the multiple times I’ve done that, where I said, ‘For scientific reasons we really should do this,’ that he hasn’t said, ‘Let’s do it.’”