THIS is Johnny Ash, he is kissing Abelino Reyna , who at the time of the photograph was our DA. The BIRTHDAY for JOHNNY party was given by Kim Falcone who managed to evade at least 3 DWI’s. Now we have our new DA, aaah, refreshing, right? Wrong.

Gerry Hefele, husband/widower of Lillie Hefele came to my apartment at 2025 Colcord the night before he left town for Germany. He told me that he was hiding from Johnny Ash and begged me to let him stay at my place that night and I did. He told me that Lillie was dead because Johnny Ash killed her.

I told this to useless Mike Tranthum of the Waco PD in 1980, I told it to representatives of the Cold Case Squad of Ft. Worth every 10 years for 40 years.

I have told Barry Johnson, David Johnson of the Sheriff’s department and volunteered to take a polygraph.

Face it, for a thousand dollar contribution, you too can buy an elected official. 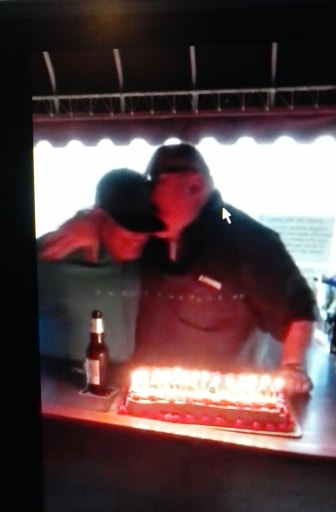 Johnny Ash also WROTE ME TWICE and threatened me. I have given that to the Sheriff, three years ago, and the DA knows it too.

Johnny is sooo scared of being caught, he has doubled down and now is threatening people in person with his bail bonding brother Joe.

SO JohnnyBoy, if you didn’t do it, why is that cigar in your hand the same as Lillie Hefele’s cigar evidence?

If anything happens to this writer or to any WOMAN surrounding the Lillie Hefele murder, please know that it’s ASH.

Hey, Johnny, take a nice polygraph, or give up your DNA for the comparison.

IF YOU ARE INNOCENT.

If ANYTHING violent happens to this writer, look no farther than fat boy.

Also, I have NOT been contacted by Deputy Dawg January who said he was going to “reinterview EVERYONE”.

Time to arm yourselves, you have no protection from murdering contributors.