Tired of listening? Turn off the sound and just ponder a few faces. Faces that have been around forever, FOREVER, you’ve seen these same people in black and white while devouring Dixie Cups and real TWINKIES during Watergate. It’s snack and impeach in color, same peeps.

Case in point. Whether young or old, in black or white on the telly, John Bolton is the #1 person I wouldn’t, WOULDN’T mess with. Nope. Not this guy. His face says, “Oh, really, “f” you” even when he’s smiling. Sorta.

Unlike Roger Stone who we’ve been stuck with since NIXON, Bolton just gets more Bolton, while Roger Stone and President Orange Adderal get more like cartoon characters.

One may have “more ba**s than brains” but John Bolton in just about any photograph, I can only imagine in person, he is the epitome of making you feel like there was a pop quiz, and you failed.

You know Rudy G, the Trumps, Pompeo who appointed Bolton all know him better than a hick from rural Texas, yet even I know not to fatsy with this face. No. Oh, hell no.

So, I endeavored to find a photo of John Bolton from ANYTIME past or present that didn’t relay, “don’t do it, dumbass” to me.

See what you think.

I can tell he has principles and he’s NOT going to go along to get along. No.

I like this one, Bolton says, “Have you lost your mind” with his face.

“You have lost your mind”

I’m not sure if this is actually Bolton or a wax figure somewhere that captures his “You are full of crap” look. 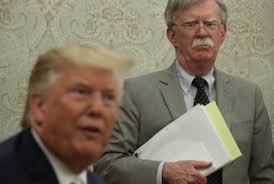 Bolton quietly contemplates what the hell is going on without TWEETING or going on FOX AND FRIENDS, Bolton, whether you like him or not at the moment, or ever, thinks.

Bolton is man enough to admit he just may have been wrong. VERY WRONG. He may not like it but he’s got character and is more than willing, he’s able to correct what he may or may not have been a party to. Bolton’s not happy, but I guarantee you, Bolton is not a liar and the most dangerous person to hack off in this whole thing.

Stock up, next week just may be John Bolton.

This man is not a fool.