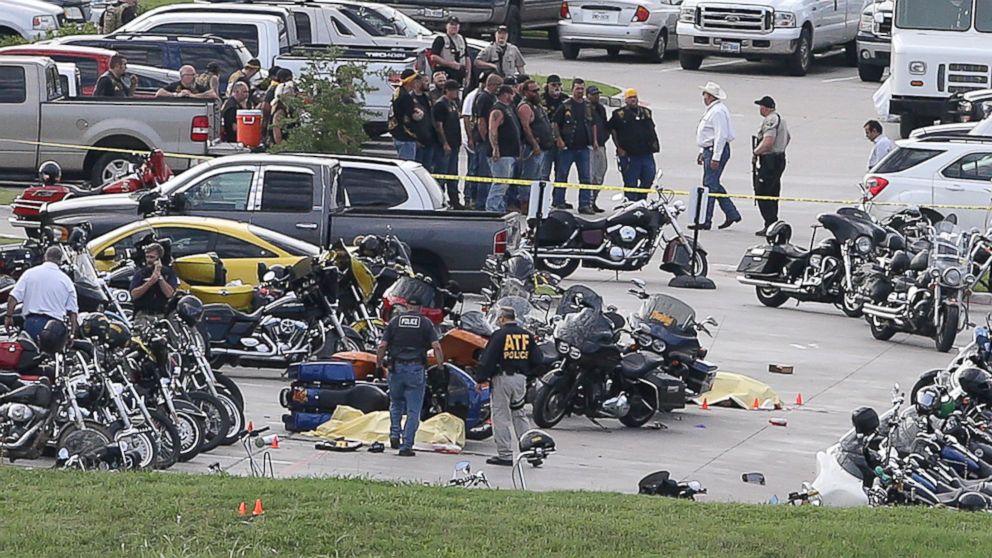 Going into the Biker Trials, lawyers for the bikers’d be calling everyone looking for dirt or paper or something on a myriad of Waco’s most prominent office holders, but by the time it was over you could have had an elected official bribing people and a drunken retired Judge wanting to open a dunking booth at a Suicide Prevention Rally and no one would care.

You could have actual film footage of a guy pouring blood onto the parking lot of a Texas restaurant, TWIN PEAKS, with the hospital looming in the background and officers not letting the poor man’s friends take him for help. Yes, he died.

We’ll never know the truth. No one will ever be asked a difficult question, Abel just skates off into the sunset and nine bikers are dead.

Twin Peaks hit Wikipedia just like Branch Davidians and the corruption beat that is Waco just goes on.

A federal judge dismissed McLennan County as a defendant in a civil rights lawsuit filed by three bikers arrested after the 2015 Twin Peaks shootout, but ruled the plaintiffs can pursue claims against the city of Waco and seven individual defendants.

In a 22-page ruling Monday, U.S. District Judge Alan D. Albright threw out some of the claims filed by bikers Bradley Terwillinger, Benjamin Matcek and Jimmy Dan Smith, as well as dismissing the county and four Waco police officers from the suit.

The lawsuit, filed by the three bikers who were never indicted in the deadly shootout, is one of about 20 pending Twin Peaks civil lawsuits involving about 130 bikers with claims of unlawful arrest and conspiracy.

The plaintiffs, represented by Dallas attorney Don Tittle, allege that former McLennan County District Attorney Abel Reyna was the final policymaker for McLennan County regarding the events at Twin Peaks. Reyna and the county disputed the claim, and Albright, citing legal precedent in dismissing the county from the lawsuit, ruled that a county sheriff, not the district attorney, is the final policymaker.

“In sum, plaintiffs allege that Reyna wrongly determined that the plaintiffs should be arrested based only on their presence at Twin Peaks,” the order states. “As discussed above, the sheriff — not the district attorney — is the final policymaker regarding ‘preserving the peace and arresting all offenders…’

“Thus, regardless of Reyna’s involvement in helping to decide whether the arrests should be made, he did not have authority to make municipal policy.”

The lawsuit alleges that Reyna was the county’s final policymaker because he “was responsible for devising the overall prosecutorial goals and strategies” of the county on the day of the shootout that left nine bikers dead and 20 injured.

“Even assuming that is accurate, Reyna still cannot be the final policymaker in this context because plaintiffs complain of wrong arrests, not of wrongful prosecution,” the order states. “Thus, Reyna’s prosecutorial goals and strategies are irrelevant to whether he was the final policymaker in the area of ordering and making arrests, because he had no authority to dictate policy in that area. Accordingly, the county cannot be held liable for Reyna’s individual actions.”

The judge denied the city’s motion to dismiss the lawsuit.

Tittle declined comment on the judge’s order. Dallas attorney Tom Brandt, who represents the county and Reyna, and Waco attorneys Mike Dixon and Charles Olson, who represent the city of Waco and its officers, did not immediately return phone messages Tuesday.

Smith, the biker, brought a separate false arrest claim against Evans, Vela, Nall and Allovio, which Albright dismissed after ruling the claim was insufficient to overcome the officers’ qualified immunity.

Smith alleges he left Twin Peaks during the shootout to take a wounded friend to the hospital. After leaving the hospital, Smith, Terwillinger and Matcek were parked at a closed business when the four officers approached them and eventually arrested Matcek and Terwillinger on weapons charges.

Smith was arrested for “directing activities of criminal street gangs, even though he did not meet any of the elements whatsoever,” the suit alleges.

“While a complaint … does not need detailed factual allegations, a plaintiff’s obligation to provide the grounds of his entitlement to relief requires more than labels and conclusions, and a formulaic recitation of the elements of a cause of action will not do,” Albright wrote, quoting legal precedent, in dismissing the officers from the suit.

More than 200 bikers were jailed on identical arrest warrant allegations and $1 million bonds each. Only one case went to trial, which ended in a hung jury favoring acquittal and a mistrial. District Attorney Barry Johnson, Reyna’s successor, dismissed the remaining charges against the bikers.