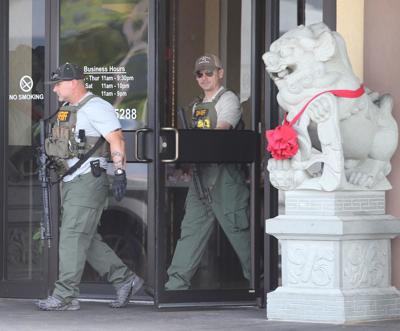 How many officers got paid that day? How much was the total bill to the TAXPAYER from this human trafficking NOT fiasco?
Part 1: WHO is “Unbound?”
What the hell is going on here? Why the puff pieces over screw ups? Let’s go to GOOGLE.
UNBOUND– Antioch Community Church

When McLennan County Sheriff’s Office deputies raided the Vegas Buffet restaurant on June 1 and arrested its business operators on labor trafficking charges, it may have been the first time local residents had an inkling of the size of the trafficking problem in Central Texas.

In the middle of the chaos following the raid, translators from the nonprofit UnBound were there, speaking with undocumented workers from China and Central America, gaining information and assuring them that they were there to help.

UnBound has been at the forefront of combating sex and labor trafficking, not only in McLennan County, but throughout the state and beyond since Antioch Community Church staff member Susan Peters began the nonprofit program in 2012. The Vegas Buffet raid merely highlighted the scope of trafficking that UnBound fights.

UNBOUND is Antioch Church’s ministry. Yes, Antioch Church, the old Sears building, Baylor’s new church of choice, home of CHIP AND JOANNA GAINES, and their families. Also well loved by KWTX and the newspaper.
Anywhere else in the world, the massive Rub and Tug fiasco and cost of this fiasco would be front page news. Who got screwed over and hit the paper? Who didn’t? WHY?
If you will remember, a Public Info Request from the Sheriff’s department shows, handwritten, “Cases given to DA,” dated June 15, 2017, BEFORE Barry Johnson took office.
Abel Reyna, our former DA,  who may or may not be a member of Antioch, but certainly was working with the UNBOUND program until the cases…………just stopped.  Rumors of Joanna Gaines’ father being seen in a video swirled and ultimately the cases were dropped and those poor unfortunates who were caught and put on the front page were whittled down to Rub and Tug adversion therapy.
So, no one wants to upset the congregation of Antioch by screaming, things like:
“That one girl was 26 years old at the Buffet, not 13”
“When you named Parnell McNamara one of your persons of the year November 2018 for closing down the Buffet,  it seems to me it was just a bit premature considering the outcome.”
“No wonder the DA’s office said, “The Sheriff didn’t do anything wrong.”
We’re all sucking up to Antioch church because they’re big and don’t want them getting upset.
I wonder how much money all these raids cost the taxpayers?
Taxpayers who aren’t on the “inside” and know that the Sheriff is secretly working for a place in Heaven while we finance it here on earth.
Why is Antioch church controlling our politicians, newspaper, and tv coverage?
NO WONDER we can’t get the truth about WHO messed up.
It could be one of the fine, upstanding folks from Antioch.  Oopsie.
Antioch Church is UNBOUND, they love the Sheriff and get him to go on fun raids and trips with and for them.
They can do no wrong because God is on their side even though they’re using your money and the time and resources of your County government.
Who the hell knew?
H