Question:  Is Sheriff’s Department Officer David Johnson busy?  Inept?  Not doing his job,  sure seems like the S.O could find out who was calling who with bribes, Magic Jack, and hundreds of calls of crazy,  threatening harassment.

Question:  Or is Sheriff making sure his buddy,  Felipe is protected and is NOT allowing David Johnson to do his job.  Incidentally,  Felipe Reyna’s neighbor is one Sherre Johnston,  yep right down the road. 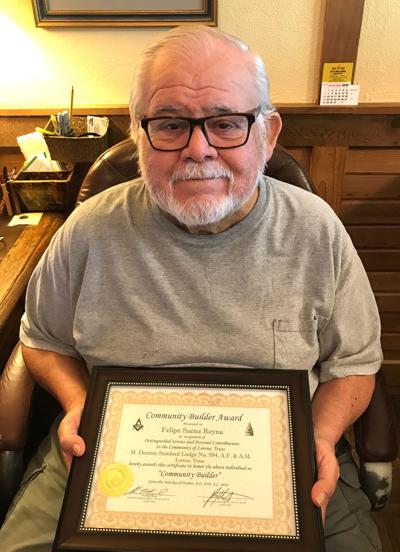 THEY KNOW DUMBASS HERE IS MAKING DRUNK CALLS AND THREATS WITH HIS BUDDIES,  WHEN HE FEELS LIKE IT AND ACTING LIKE A GREAT ORATOR WHEN IT SUITS HIM.

Baylor Graduate,  about the same age as the Sheriff, father of Abel, sore loser, sucked up to by people who KNOW he’s under investigation.  Oh,  just gag me with a spoon.

Is everyone just nuts?

No,  there is no boys club.  The shit you here about the Masonic Brotherhood is just crazy conspiracy theories.  Parnell McNamara wouldn’t let Felipe Reyna call and harass people,  no,  he wouldn’t.  He wouldn’t go to a parade and make sure Felipe didn’t get into trouble but not tell Felipe to KNOCK IT THE FUCK OFF.

The award acknowledges non-Masons who have distinguished themselves through their service to the community, to local, state or national government, to their church or synagogue, or to humanity.

Reyna’s brother, Phil, and his son, Daniel, are Masons.

Although Reyna is not a Mason, he said he has always admired the work that Masons do.

One story that has stuck with him was that Gen. Sam Houston reportedly spared the life of Mexican Gen. Santa Anna after his capture at the Battle of San Jacinto because Santa Anna displayed the Masonic sign of distress.

Houston was a well-known Mason, though there is some dispute that the Texas general would have seen such a sign from Santa Anna.
Numerous historians believe that Houston ordered those searching for the Mexican general to take him alive because he would be more valuable to Texas alive than dead.

Santa Anna was a Scottish Rite Mason in Mexico. His original Scottish Rite membership certificate is kept in the Livingston Masonic Library of the Masonic Grand Lodge of New York.

One thought on “LORENA MASONIC LODGE HONORS DUMBASS DESPITE INVESTIGATION”