Heavy.com News Compiles some interesting facts you might like while we wait for FRONTLINE, DATELINE, VICE, TWENTY FOUR HOURS, and a made for tv movie about this.

Judge Ralph Strother is a Texas judge under fire for allowing former Baylor frat president Jacob Walter Anderson escape prison time after he was charged with raping a teenage student.

Anderson, the 23-year-old former head of Baylor’s Phi Delta Theta fraternity, was charged with sexually assaulting a sophomore at an off-campus party in February of 2016 when the alleged victim was 19, The Waco Tribune-Herald reported.

Strother allowed Anderson to serve no jail time after accepting his plea bargain. Prosecutors agreed to allow Anderson to plead no contest to a third-degree felony charge of unlawful restraint and receive deferred probation and pay a $400 fine. He will not have to register as a sex offender after prosecutors agreed to drop four counts of sexual assault.

Anderson’s victim cried loudly in court as Strother accepted the plea deal. She criticized Strother, prosecutor Hilary LaBorde, who agreed to the deal, and McLennan County District Attorney Abel Reyna, who did not attend the hearing.

“If I had the courage to come back to Waco and face my rapist and testify, you could at least have had enough respect for me to show up today,” she said. “You both will have to live with this decision to let a rapist run free in society without any warning to future victims. I wonder if you will have nightmares every night watching Jacob rape me over and over again?”

Anderson now attends the University of Texas at Dallas and works for a real estate development company in Dallas.

Here’s what you need to know:

She added that she went “completely unconscious” before Anderson “dumped me face down in the dirt and left me there to die” while she was “half-naked.”

Anderson faced four counts of sexual assault but prosecutors agreed to let him plead “no contest” to a much lesser charge that will allow him to avoid prison and registering as a sex offender. He will instead only be required to serve three years of probation,The Waco Tribune-Herald reported

Prior to handing down his decision to accept the plea deal, Strother acknowledged that the case had drawn added media attention and added that not much about this case has been normal.”

He said that most of the public comments he had received via email and saw on social media were “not fully informed, misinformed or totally uninformed.”

2. Jacob Anderson’s Accuser Told the Court, ‘He Raped Me and Left Me To Die’

The Waco Tribune-Herald reported that the victim cried loudly in court as Strother handed down the decision and urged him to let her have her day in court.

In a victim impact statement, she told Strother that she was devastated that he approved the bargain. She also critcized prosecutor Hilary LaBorde, who agreed to the deal with Anderson, and called out McLennan County District Attorney Abel Reyna for not attending the hearing.

“If I had the courage to come back to Waco and face my rapist and testify, you could at least have had enough respect for me to show up today,” she said. “You both will have to live with this decision to let a rapist run free in society without any warning to future victims. I wonder if you will have nightmares every night watching Jacob rape me over and over again?”

She also addressed Anderson, detailing her allegations in graphic detail.

“When I was completely unconscious, he dumped me face down in the dirt and left me there to die,” the statement added. “He had taken what he wanted, had proven his power over my body. He then walked home and went to bed without a second thought to the ravaged, half-dead woman he had left behind.”

“I wonder if other women in Waco will report their rapes if Jacob Anderson gets this plea? Why would they bother?” she wrote.

LaBorde said in a public statement that she believed the plea deal was the “best outcome given the facts of the case,” NBC News reported.

“Given the claims made public, I understand why people are upset. However, all of the facts must be considered and there are many facts the public does not have,” LaBorde said. “In approving this agreement, Judge Strother had access to all the statements that have ever been made by all people involved and agreed that the plea agreement offered was appropriate in this case.”

3. Strother & Prosecutor Hilary LaBorde Have Faced Public Outrage for Their Handling of the Case

After the ruling, the accuser’s attorney, Vic Feazell, said in a statement to NBC News that “our entire system failed this young woman. In 40 years of law practice, I’ve never seen anything like this.”

LaBorde defended he decision by citing another similar case that resulted in an acquittal.

“[The jury] engaged in a lot of victim blaming — and the behavior of that victim and [this victim] is very similar,” she wrote. “It’s my opinion that our jurors aren’t ready to blame rapists and not victims when there isn’t concrete proof of more than one victim.”

Paul Cassell, a former federal prosecutor who is now a law professor at the University of Utah, slammed LaBorde’s decision to The Washington Post.

“The prosecutor’s own evaluation of the case make clear that she is relying on an inappropriate consideration – specifically a prospective juror’s likely belief in ‘rape myths’ – in striking this remarkable deal,” he said. “Given the violence alleged, this is not a split-the-difference case. Either the victim was forcibly raped or not – pick one or the other. It’s hard to understand why the prosecutor can somehow propose to view the facts through rose-colored glasses as some sort of low-level sexual misconduct appropriate for a probationary sentence.”

The victim’s mother also rejected LaBorde’s claims in an interview with The Waco Tribune-Herald.

“She never told us about that (first) one, and she had not even spoken to the witnesses or even read the Title IX report yet,” the woman’s mother said. “She never bothered to put one ounce of effort into this case. She led (the victim) on and put her through this knowing she was going to betray her the whole time.”

4. Strother Has a History of Light Sentences for Accused Rapists

Texas judge accepts plea bargain allowing man accused of repeatedly raping a woman at a Baylor University party to avoid serving jail time. Jacob Walter Anderson pleaded no contest to a lesser charge of unlawful restraint and has agreed to seek counselling and pay a $400 fine.

This marks at least the 3rd time Judge Ralph Strother has approved probation for men accused of sexually assaulting students at Baylor University, a private Christian university in Waco, Texas.

In 2016, Strother similarly sentenced a man to deferred probation after he pleaded guilty to raping a former Baylor University student in 2013 while she was drunk. Strother ordered the man to pay for the victim’s counseling, The New York Daily Newsreported.

Earlier this year, Strother sentenced a man to felony probation for sexually assaulting a former Baylor student who the man claimed consented. Strother’s punishment included 30 days in jail, but the man was allowed to serve the time on weekends while he pursued a degree at the University of Texas.

5. More Than 90,000 People Haved Signed a Petition Protesting the Ruling 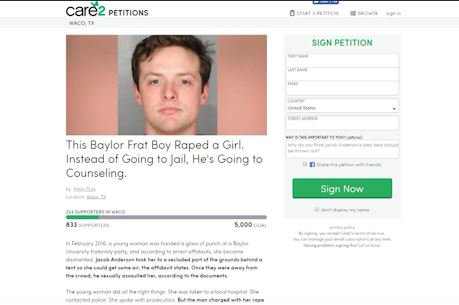 Petition to convince McLennan Co judge to reject Jacob Anderson’s plea deal is taking off. As of Saturday evening almost 11,000 people have signed the petition.

More than 93,000 people have signed a petition started by Baylor graduate student Erin Albin to protest the decision.

“By agreeing to this plea, (prosecutor Hilary LaBorde and the McLennan County DA’s office have allowed that rape is not longer a crime in Texas,” the petition says.

“They are telling the rapists and sexual predators ‘Go ahead and violently rape, choke to near death, and abandon your unconscious, ravaged and used-up victim and we will make sure you get some counseling. Even if a grand jury indicts you on four counts of sexual assault, we don’t care,’” the page says.