A message of hope for 2019 from Harry Storm

NO OTHER GROUP of people on this planet could have ever been this just gawddamned stupid ever again.  Face it.

The only reason we’re not counting “recusals” and other shi* with Matt Johnson is because Ralph Strother took the lead and everyone’s forgotten Johnson of the “Carrizal” trial………. Strother has more petitions than even Harry can keep up with stoned,  after five weeks there’s such a laughter factor it’s heaven.  Don’t feel sorry for these “good ole boys”,  oh,  please.

Don’t give up hope,  they may not be gone,  but they certainly got themselves exposed this year.

You two can walk through a woman’s medication by noon some days.  F#ck you. 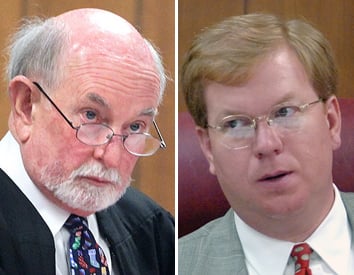 Thank you,  on the bright side of these two is a fact.

BARRY JOHNSON DAMNED SURE AIN’T THIS STUPID.  NO.  THIS KIND OF CORRUPTION ENDS WITH THESE OLD MEN.

Besides,  who trusts you two anymore?  Really?

Just like when some actors had to go home when “talkies” replaced silent movies,  these two need to realize there is an INTERNET out there and being a worldwide asshole is forever.

Take no prisoners.  Bikers taught me that and it’s better than trying to figure out the brains of men that would do this much injustice to this many people,  in secret for so long.  CNN exposed what was done to the bikers.  FAKE NEWS?  No.

The Courthouse is kept as cold as a slaughterhouse by Judge Matt Johnson,  there are no water fountains, and the Judges are just asses.  Their clerks tell you to have a blessed day or some shit and it’s just an alternate universe of hypocrisy.

Ralph:  THREE sweet deals for Baylor boys?  What the hell did you think was going to happen?  Hello?  WHY did you run the Reyna corruption down to the very last minute with the Jacob Anderson thing?  WTF?

Answers,  not smug secrets,  you ain’t no priest,  you’re a public servant.  You’re actually an ass.

Obviously,  everyone is scared to tell you the truth about yourself and it’s all gotten out of hand.

No one fancies a thought that Barry Johnson is a crook either.  That the Reyna folk make fun of Johnson’s old car is sort of a hint as to where the mindset is.  Johnson,  unlike Abel is comfortable in his own skin and doesn’t see what the fuss is about.

Strother probably won’t resign,  why should he,  we’re sure the family is happy he’s not there and being mean and hurting people for their own good in his judicial/god brain is who he is and we don’t understand.

Sneaky at the very,  very least.

Which is going to cost them all this coming year when the depositions begin and the County drops Abel off their insurance.

BARRY JOHNSON WOULDN’T DO THIS KIND OF SHIT,  WHO THE HELL WOULD?  Oh.  yeah.

Being corrupt ALL THE WAY through the entire year with Abel,  pretending to be oh,  so holy,  enough!  Not to go into Hilary LaBorde,  omg.  duhhh.

The other good part is that somewhere out there REAL lawyers,  young and full of ideals,  are thinking about running for Judge when Judge Ralph Strother gets the hell out of there.

They see Judge Vicki Menard every day and when people talk about her,  it’s all good.  It’s all fair.  She’s not a peacock ,  she didn’t need extra protection this entire year.

She gives Baylor a good name.

Can’t wait to see what happens next.

One thought on ““HE’S JUST LIKE THE REST OF THEM””