Went through all that trouble to move the body and now this?

Instead of,  “I’m sorry and will never drive drunk again”,  we get a defiant little 50 year old woman who’s DEAL IS SET IN STONE so now she can come on out in her ankle boots and call other people “nut case”.  This after Harry did NOT respond to another rant using Harry’s son as bait.

Sherre it seems vows to “fight” for Mike Mc’s good name even though his brother,  Sheriff Parnell McNamara “doesn’t have the balls to fight you”.  Seems there’s a threat,   “I do”.  Well, did Parnell let little girl down?  Uh oh. Look out.

We are lovin’ this so much,  we’ll just let you have a look for yourself.

You can call me whatever you want,  I never cheated on my spouse and surely never in 30 years drove drunk.  Nope.  Drugs?  Smoked some weed,  sure did.

Aaaah,  Sheriff Mc after going through all that to move your brother you created a monster who is NOT happy with you……..uh oh 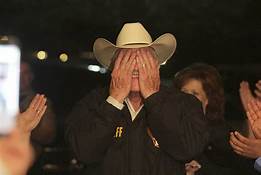