We knew you knew better……….

Patrick Swanton,  well,  they certainly put you in a bad position as spokesman of the TWIN PEAKS debauchery.  Lucky you.  You tried hard but there were times when your words said one thing but your face was screaming,  “oh,  shit”.  Unfortunately,  the brotherhood within the department has gotten a bit out of hand and TWIN PEAKS was a monumental screw up that took a village.  Harry’s sappy and would like to think you had very little to no idea what the hell was going on and you’dve done things differently had you been in charge.  Hell,  Wacoans have grown up with you Pat.  We have to give you a high number,  Yes Man,  just cause well,  you were.

What we can’t wrap our heads around though,  is when,  ruling the investigation of the Ashley Dawn Rogers and her two kids’  fire,  that the investigation into their murder was closed,  “after exhausting all leads in the case”,  a K9 team could turn up no evidence of accelerants.  “At this point, there’s nowhere else that we can go with it.  We can always open it back up, ” he told media outlets.  The same old same old non cooperation and incredible lack of curiosity led to another disagreement between the Fire Department who ruled it arson and the cops who just let it die.  Let it die because,  perhaps,  they were influenced by a close personal relationship between yet another police person and a member of the Aryan Brotherhood,  a snitch in the case.

Jim Parks the Legendary interviewed the sister of Ashley Dawn,  her interview is printed below.  Quite a case against an officer and the others covering it up,  quite messily, once again. 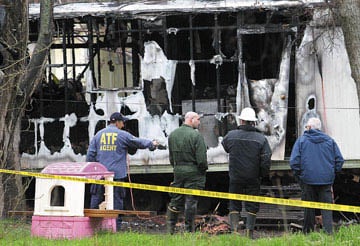 Waco – A Waco woman named Keri Schlasman, whose sister and two of her kids died in a mysterious explosion and fire of her trailer on N. 19th St. in 2013, forced a paradigm shift in perceptions at the Waco Police Department and District Attorney’s Office by making a simple on-line statement.

The event marks a radical departure in what has been a nagging dialog of lingering agony and disruptive speculation throughout the law enforcement community.

The worm turned a little before noon on Wednesday, March 15 when the sister of Ashley Dawn Rogers commented on a four-year-old news story that appeared in “The Legendary” describing just how a dispute between the Waco cops and the Prosecutor erupted into a full-fledged feud.

Within a few minutes, news of her defiant stand had flashed between people situated in offices statewide.

Quite simply, Ms. Schlasman publicly accused a female Waco Police Detective named Sherry Kingrey of acting to cover up evidence of just who used fire as the weapon that murdered her sister and her two kids. A third child escaped the blaze that erupted on February16, 2012. She furthermore accused the lady detective of having a close personal relationship with Delvin Maddison, a member of a prison gang named the Aryan Brotherhood of Texas, who has been accused of committing the crime.

In the ensuing years, allegations of leaks from the District Attorney’s office have abounded, as well, and the resulting furor cost the Chief of Police, the Fire Chief, and the Arson Investigator their jobs.

To read the article to which Ms. Schlashman reacted, click here.http://downdirtyword.blogspot.com/2013/03/warrants-fines-led-to-car-theft-7.html

Keri Schlasman U make me sick. I bet Mrs. Kingery didn’t tell u she was running around getting computers and cell phones with evidence of who was responsible for my sister’s death. Didd she forget to mention why she was running g around getting rid of the stuff she collected? Maybe u buy that shit and why are ppl called meth heads instead of human beings? U have some nerve to post this crooked ass detective as a saint. She is a crook. And I don’t care what story u paint cause I’m bout to paint a true one. She was one of the many crooked cops that hindered my sister’s murder investigation if u want to know my opinion. And Delvin is not innocent and im bout to get an attorney and find out who I can contact over McLennan county so we can weed out all these bad cops. If u keep making me relive this nightmare over and over again I’m gonna be real stupid about it cause I’m tired of my sister death being a big joke to u sons of bitches. And ima see about this crash shit. Yall got me fucked up.

Keri Schlasman Yall wanna keep running it in my face how these killers got away with what they did and that crooked ass police bitch gets a spot light as a good cop? Hell naw. Yeah I’m bout to get real stupid.