Okay, the first time he did it, he kinda sorta got suckered into it by the idiots at Channel 10 and his old lady, however, this SECOND time is racist, you know people came up and told him it was, get real here.

IN 2016,  before Sheriff’s singing career took off, trust between public officials, the Waco NAACP,  and the Community Race Relations Black Coalition, that Sherriff and “Doc” Anderson took out a full page suck up ad from the suck up Trib.

So here we are one “dog and pony show” that “all lives matter,” intersecting with Sheriff’s singing career.

“They call him the “singing Sheriff,” Charlotte McNamara on Channel 10 News the first time this happened.  Thinking for sure he’d never do THAT again.  WRONG.

Dumb and Dumber, Unaware and Unawarer 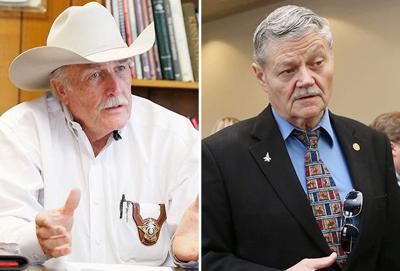 “We don’t tolerate racism in this department,” McNamara said. “We just don’t. We treat everybody fairly.”

McLennan County’s top law enforcement officer says he didn’t know the objectives or purpose of the Black Lives Matters movement when he bought a full-page ad in the Sept. 2 issue of the Hometown News that says “All Lives Matter.”

Sheriff Parnell McNamara and State Rep. Charles “Doc” Anderson, R-Waco, each bought ads with the phrase, though both said they were unaware of the other’s purchase at the time.

McNamara said he bought the ad because that’s what he believes.

When police officers commit what appear to be crimes against blacks and face no consequences, it looks as if black lives don’t matter, Waco NAACP President Peaches Henry said.

Henry and the Waco NAACP have called for local law enforcement agencies to use body cameras and implement citizen review boards and other measures that would allow more public oversight and communication with police.

“Given the actions that are going on in our community, it doesn’t appear to us that African-American lives matter, and so what we are saying is please count us in humanity as well,” she said.

Jo Welter, Community Race Relations Coalition board chairman, said it does matter what color someone’s skin is, because of unequal treatment.

Emotions dictate behavior, Welter said. She tells other members of the coalition they’ll never know what it is they say or do that will trigger someone to change their behavior.

Welter said she had a black woman at a meeting explain that “People of color can never ever relax because they are always representing their group. Always.”

She said a 3 a.m. trip to Walgreens for a prescription requires getting fully dressed up for fear she might give individuals the opportunity to treat her less because of the color of her skin.

Those listening were dumbfounded, Welter said.

“It doesn’t mean they are going to go up tomorrow and have a glowing halo over their heads. When people have an emotional reaction to something it changes their behavior,” she said. “When one heart changes it has a profound effect.”

Welter said she believes McNamara has a good heart. His unintended message, like others, stems from ignorance or misunderstanding about the issue, she said. People are so deeply affected by racist teachings ingrained in society they can unconsciously do offensive things, she said. Racism is a difficult subject.

McNamara has attended one of the coalition’s workshops on undoing racism, she said, adding she appreciated he came out for that.