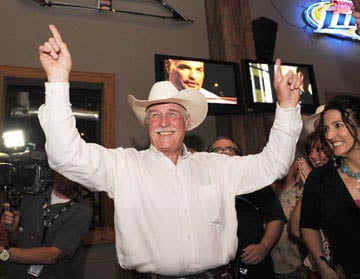 What the hell does it take here?  You need a platform,  call me,  you need evidence of wrongdoing,  write me.  From the unreported party given by J-Hawk to the strange number of the State of Texas Campaign Contribution Sheet, from the dead inmates, to the lawsuits in his very beginning, to the rumors, to moving the brother’s body, failing jail standards commission,  to even more.  PLEASE someone,  run against this man.

Sheriff Parnell McNamara cannot make it through ONE in person debate.

He is legendary for “avoiding confrontation”,  he won’t even show up.

Their day to day treatment of people is beyond appalling.  There is no “public servant” feeling going on anywhere,  except to your face.  Most all of them are morbidly obese, couldn’t outrun my grandmother, red faced, and who knows what the average blood pressure is.  Cases appear,  cases disappear.

They don’t treat you right and that comes from them protecting the top.  Parnell McNamara does not run a tight ship,  plays favorites,  lets his girlfriends and friends go wild and blackmail him publicly, has more than a few questions to answer to about the moving of dead brother’s body and has gotten by being photogenic and a narcissist, if Waco can defeat Abel Reyna they damned sure can defeat Parnell.

Hey,  Parnell,  did you TELL Sherre to make this call?  I think so.  That is enough for me never to vote for anyone that stupid.

The Sheriff’s girlfriend threatened people,  one,  in writing.  That person reported the incident to the Sheriff’s department.  On tape last August.

His friends and girlfriends do whatever they want to do because………they can and they know it.

You don’t know who is clean or who isn’t,  who’s in it with who but you have ideas and information and it just doesn’t look or feel right.

Come on here.  This man is going to say,  “trust me” and he thinks you’re going to do it just on that and his looks AGAIN.  He’s old, he’s corrupt, look at TWIN PEAKS, all that protecting one another bullshit with Sheriff’s cars in front of Judge’s house and crap.

He got sued right of the bat,  $2 million dollars but,  what am I doing here.  Young women and men of this County can beat this man.  Borrow the filing fee,  run against this man he is vulnerable.  People are no longer fools.

Can you show up at a DEBATE?  If so,  you can be Sheriff.

Abel didn’t think he could be beaten either.

You’ll have lots of help.

PS  Dear Sheriff,  you’ve had a year,  it’ll be a year March 26th. you have to announce by February 28th. so I can’t give you anymore time to do what you should have done.  Sorry.