Tommy was in deep trouble in 2006, deep, lots of fingerpointing between him, Dan Maloney, and Cal Luedke. Big lawsuit, ultimately they say the sum of $13 million dollars is what ole Tommy cost the newspaper, now he’s in charge of what is a story and what isn’t. Parnell did his part, defending his ole buddy Tommy as much, and as long as he possibly could. Like true friends, they truly help one another over and over and over again. Tommy pays back the Sheriff in each and every article and those he leaves out too. Makes one feel all warm and fuzzy. You?

Who’s Really to Blame for the Botched Raid in Waco? 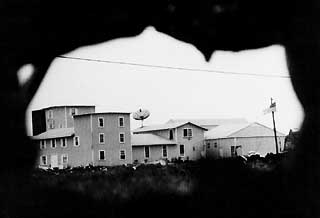 Mount Carmel, as seen from an FBI sniper’s vantage point shortly before the raid

The blame game started just after the last body bag was zipped up. Four agents from the Bureau of Alcohol, Tobacco and Firearms and six Branch Davidians were dead. The emergency room at Providence Hospital in Waco was awash in the blood of injured ATF agents. David Koresh, still holed up in his compound, was bleeding from gunshot wounds in his right wrist and left hip. The bloodiest and most controversial clash in American law-enforcement history had begun. A 51-day siege followed. It ended — after assaults by federal tanks and repeated tear gassings — with a fire that rapidly consumed the Davidians’ wooden compound. Another 75 people died on April 19. The search to find culprits for both disasters got under way immediately.

The ATF certainly didn’t want the blame for the February clash — what should have been a normal execution of a search warrant. So it quickly found a scapegoat. The raid would have gone smoothly, the ATF said, had a TV cameraman not alerted the Davidians that the raid was imminent. In fact, the official report on the shootout by the U.S. Treasury Department found that the element of surprise was lost long before the heavily armed agents — hidden in two cattle trailers — headed up the long, muddy driveway to Mount Carmel.

The Davidians knew of the raid in advance because a Koresh associate and U.S. Mail carrier, David Jones, had run into Jim Peeler, a cameraman for Waco’s KWTX-TV, on a rural road near Mount Carmel shortly before the raid. When Jones learned the cameraman was looking for the Davidian residence, he raced back to alert Koresh. As he arrived at the tan wooden structure that rainy Sunday morning, ATF agent Robert Rodriguez, working undercover within the compound, was inside the building talking with Koresh. A few minutes later, Rodriguez left and phoned his ATF superiors, advising them to call off the raid because Koresh had been alerted. Rodriguez’s superiors ignored his warning. And so the bloodiest and most controversial event in American law enforcement history began a few minutes later, at 9:47am, February 28, 1993.

Those facts are clear. But one question has never been satisfactorily answered : How did the TV cameraman and the other members of the media on the scene know the raid was going to happen? The Texas Rangers and the ATF have known the answer for over a year, and it is disturbing: Media and law enforcement officials say journalists were tipped off by Cal Luedke, a longtime member of McClennan County Sheriff’s Office, who was part of the ATF’s raid preparation and support team.

The review of the events leading to the shootout are particularly important now that the trial in the Davidians’ $675 million wrongful death lawsuit against the federal government has gotten under way this week in Waco.

Luedke vehemently denies charges that he tipped off the media. But Dan Mulloney, the KWTX cameraman who shot the now-familiar video of ATF agents storming the Waco compound, says the station learned about the raid from Tommy Witherspoon, a reporter for the Waco Tribune-Herald with whom Mulloney had a long history of sharing sources and tips. And Witherspoon’s source, Mulloney said, was Luedke. “Tommy told me it was Cal. No doubt about it,” Mulloney said. “I knew if Tommy said something was true, it was. I could trust him 100%. And he told me that Cal had told him the raid had been moved up to Sunday.”

Witherspoon denies telling Mulloney he got the information from Luedke. “I never told Mulloney who my source was,” Witherspoon said last week. “Seven years later, I don’t understand why this is a story.”

Witherspoon also points out that Mulloney had another source who tipped him off about the ATF raid on Mount Carmel. Indeed, Mulloney has readily admitted that he confirmed the tip he got from Witherspoon with his girlfriend, who worked at American Medical Transport, the Waco ambulance company the ATF asked to be on alert on the morning of the raid.

Although Witherspoon has consistently refused to corroborate the source of his information, state and federal law enforcement officials involved in the investigation say they have evidence that Luedke leaked news about the raid to the media. Those same sources say that Luedke, the former head of the McLennan County Roadrunner Drug Task Force, has even confessed that he provided details on the raid to the media and that his confession was forwarded to U.S. Attorney General Janet Reno’s office in Washington for possible action. But Reno has apparently refused to do anything with the information on Luedke; he has never been indicted or charged by federal authorities. The AG’s office has no comment on the matter.